Not too long ago (Phillips, 2014) I proposed that many geomorphic systems are characterized by divergent behavior driven by either self-reinforcing feedbacks, or by “competitive” mutually-limiting relationships. However, this divergent evolution cannot continue indefinitely, and is ultimately limited by some sort of thresholds. Watts et al. (2014) recently published a paper that I think provides a good example of this sort of behavior a bit different from the ones I cited.

In a low-relief karst wetland landscape in Florida, they found that feedbacks among vegetation, nutrient availability, hydroperiod, and rock weathering (dissolution) result in formation of isolated forested wetland depressions (cypress domes) amongst prairie-type wetlands. However, as the cypress dome (they are called domes because of the taller canopies, despite the depressional landform) features grow, water volume thresholds limit further growth. 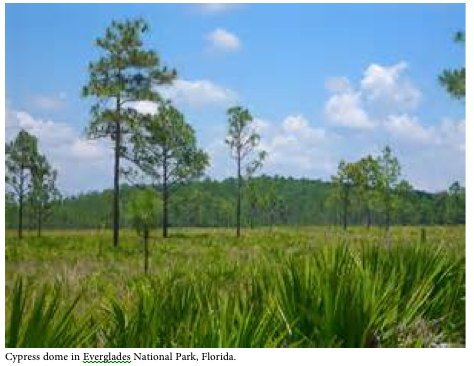