Natural selection is most familiar with respect to Darwinian evolution. However, though some biologists will argue that selection acts only on genes, this is a very narrow and restricted view. Selection operates on a variety of environmental phenomena, and at a variety of scales. In hydrology and geomorphology, the principle of gradient selection dictates that the most efficient flow paths are preferred over less efficient ones, and that these paths tend to be reinforced. That’s why water flows organize themselves into channels (more efficient than diffuse flows), and channels into networks. The principle of resistance selection in geomorphology is simply that more resistant features will persist while less resistant ones will be removed more quickly. Thus geomorphic processes select for certain forms and features and against others. Among others, Gerald Nanson, Rowl Twidale, and Luna Leopold have written on selection in geomorphology, and Henry Lin, among others, in hydrology. 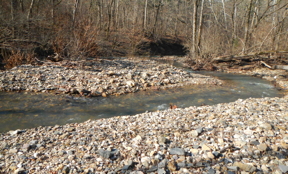 Natural selection also operates at ecological scales. When seeds arrive on a patch of ground, for example, edaphic factors sort out which ones can or cannot germinate, and which of those that do falter or prosper. This sorting or sifting of arriving species is at the heart of Gleason’s individualistic concept of plant associations, but operates in ecological systems in general.

Andreas Lapenis has written on biogeochemical selection, whereby more efficient cyclers of energy, water, and nutrients are favored—obviously here selection is acting at the level of ecological function, not genes. In weathering and soil formation, resistant minerals are preferentially preserved and concentrated.

There are, no doubt, many examples of sorting, sifting, and preferential preservation in Earth and environmental sciences. Thus, while Darwin and Wallace first articulated this logic with respect to the origin of biological species, selective processes are ubiquitous in the natural world.

My own earlier thoughts on these issues can be found in the citations below.