Nicholas Pinter, a Southern Illinois University geomorphologist, gave a nice talk yesterday on rivers and flooding in the 21st century as part of UK’s Water Week. Pinter’s talk got me to thinking about the concept of “equilibrium” in environmental systems and what it means to both geoscientists and laypersons. Pinter correctly noted that rivers tend toward dynamic equilibrium, and more specifically, dynamic metastable equilibrium. This means three things: First, the system (river) is more or less constantly changing (the dynamic part). Second, equilibrium is of the type envisioned in mathematics and systems theory—that is, a state or condition the system settles into after a change or perturbation, with no further connotation other than that the response to the change has run its course (I’ve called this “relaxation time equilibrium” in my work). Third, “metastable” means that these equilibrium states are not necessarily stable and self-maintaining, and may be sensitive to future disturbances—even relatively small ones. Pinter’s message is that dynamic equilibrium in rivers means that rivers are constantly changing. 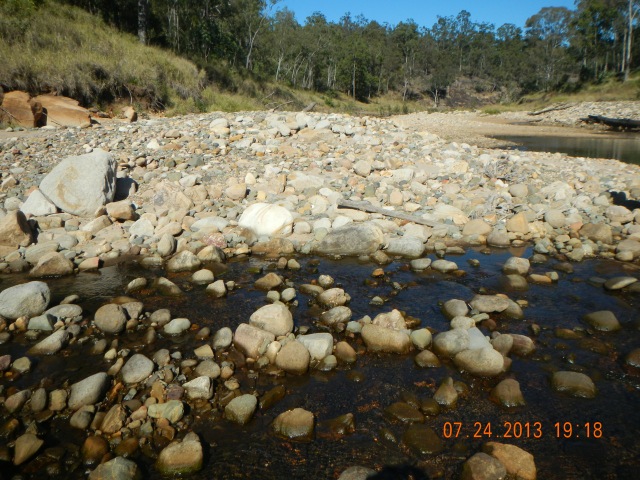 Lockyer Creek, Queensland, Australia; still adjusting in 2013 to effects of a flood in 2011.

This is in ironic contrast to the usual layperson’s understanding of equilibrium, which typically equates it with some sort of normative state of balance. This implies that there is a single normal or natural condition, and that following a change the river should return to this condition. This can happen, but often does not!

Dynamic metastable equilibrium is also, confusingly, inconsistent with the concept of dynamic equilibrium introduced into geomorphology in the 1950s and persisting to this day. This “dynamic equilibrium” is actually (as I am hardly the first or only geomorphologist to point out) a steady-state equilibrium (SSE). SSE implies that inputs and outputs are approximately balanced over time, so that even as the system is modified by, e.g., erosion and deposition, its general state doesn’t change. Thus, for instance, SSE implies that the amount of sediment entering a river is roughly balanced by the river’s sediment transport capacity, or that the rate of uplift of a mountain range is equal to the rate of denudation. SSE indeed occurs in real Earth surface systems—and is a very useful concept as a reference condition or a simplifying assumption for models—but is rare, transient, and approximate with respect to what is actually happening in rivers or other systems.

Because of the confusion of scientists and laypersons alike about what equilibrium actually means, I have pretty much stopped using the term except when it is carefully qualified. However, the word and the concepts are irreversibly entrenched, and if we are going to continue to use them, Pinter’s approach—that dynamic equilibrium means dynamic metastable equilibrium, and that rivers are constantly changing—is the way to go.

Some of my more technical and extensive thoughts, rantings, and analyses on these points are given here: