Yesterday I heard a very interesting river restoration workshop at the British Society for Geomorphology meeting. What I’m about to discuss was not the focus of the workshop, but it was triggered by thinking about geomorphology, hydrology, and river science in stream rehabilitation and restoration, which is a big business now.

The stream restoration problem is often portrayed as something like this:

That is, the stream is currently in some kind of degraded, suboptimal, unwanted state. The goal is to restore it to a “natural” or some more desired condition, often conceived as whatever the stream was like before the degradation commenced. There are a number of problems with this, one being that in many cases the pre-existing state is not known. Even if it is, since rivers—like other landforms and ecosystems—are dynamic and changeable, there is no particular scientific reason to believe that, in the absence of human-driven changes, the river would still be now as it was decades ago.

Indeed, there is no single natural, normal state for a river to be in. Rather, there are a range of possibilities, constrained by the laws that govern fluvial geomorphology and contingent on local environmental conditions, past events, and the trajectory of fluvial change. There is also, of course, more than one way for a stream to be degraded. So I see it more like this:

The “natural” circle represents the often large but always finite range of possible natural (i.e., with minimal human influence) states, and the “degraded” one the possible degraded states. There is some overlap because occasionally degradation can occur without human meddling.

Now let’s figure in a number of possibilities for restored rivers, which sometimes mimic natural states, and which occasionally go wrong and contribute to degradation. Using “engineered” as shorthand for river modifications whose primary goal is something other than restoration (navigation, water supply, erosion control, drainage, etc.), the Venn diagram looks like this: 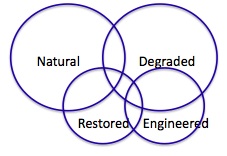 In restoration/rehabilitation, we are concerned with a specific, existing degraded condition. There must be some sort of target or goal for restoration, however, be it a pre-existing condition, an undisturbed reference stream, or meant to achieve some specific environmental goal or ecosystem service.

If we do it this way, however, we need to realize that the target is a choice from among multiple possibilities, not a recovery to a single “right” condition. A number of conceptual frameworks for river R & R recognize the natural dynamism of fluvial systems, the multiple possible states and trajectories, and that there is no single natural state. This approach, symbolized below, is in many cases more practical, less expensive, and more “natural” that attempting to restore a specific state. 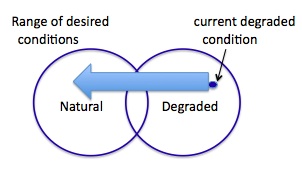 Rather than (re)constructing a specific stream condition, the idea is to remove modifications and/or restore process regimes that will allow movement away from the degraded state—not to some specific target, but to somewhere within the natural circle. These ideas, by the way, are applicable not just to rivers, but to ecosystem restoration and environmental rehabilitation more generally.